The Simple Way to Overcome Resistance to Change

Rapid Action Teams make change happen. The key to moving from talk to action quickly is overcoming the first barrier to change – willingness to take risks! This starts with sharing ideas and being willing to champion an idea into a plan of action.

Rapid Action provides an energizing and reliable way to get past the first hurdle to change. However, as Champions begin implementing their action plans, a different barrier must be overcome: The tendency for people outside the team to resist change!

Now, rather than simply force change on people via leadership directive, Rapid Action Teams can follow a simple principle to overcome this new barrier: persuade through engagement.

Overcoming resistance begins with recognizing that most people see things from the perspective they work with every day. For example, if frontline employees are conditioned to things NOT working, you can expect some skepticism when someone (even a peer) comes along with the suggestion that things can improve “if only…”

Persuading through engagement starts with empathy. Before presenting new ideas, Teams need to identify their key stakeholders (internal or external) and anticipate their concerns – whether it’s a supervisor afraid of anything that might add more work or a senior manager that’s always ready to say no to new spending. By anticipating concerns, Teams can shape their action plans to stakeholders’ readiness for change and their likely perceptions of risk and cost associated with new ideas. Think of it this way: 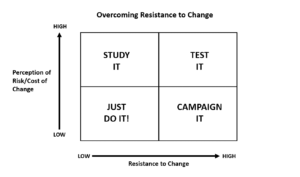 This map suggests different paths depending on several factors.

Let’s talk about an example: Assume you are a Rapid Action Team charged with improving baggage handling at an airport. The idea is to create a separate team for handling transfer bags between airlines. Bag room employees are overwhelmed right now by the daily chaos of things and are willing to try anything to relieve the stress. However, the luggage manager is under pressure to reduce baggage claims in general, but particularly on transfer flights.

Referring to our map, we have a baggage manager that is HIGHLY resistant to change because there is HIGH perceived risk associated with the new idea. So, the strategy that makes the most sense is to TEST IT. Get things going in a small area to prove the concept before a wider roll out. The luggage manager is more comfortable with the small risk of a test and is willing to get on board.

By considering your stakeholders first and mapping the right strategy, Rapid Action Teams have options for implementing new ideas at a controlled speed.

See the full suite of tools in action with the guidance of a Leap Rapid Action specialist.
Schedule a Demo

See it in Action

How a regional health plan provider was able to use Rapid Action™, a simple approach to team problem solving, to accelerate integration efforts after a recent merger.

New investors can be the lifeblood of regional banks. One Midwest organization was finding that their process for contracting with new investors was inefficient and often delayed, causing frustration and missed capital opportunity. Using Rapid Action, they reduced cycle times by 50% in just over one month.